Meet Our Experts
Editor’s note: This story first appeared in the latest issue of Field Service, a quarterly print magazine from Field Service Digital and ServiceMax. Check out the full magazine in print or online.

Inside a cramped, chilled cellar in the basement of the Olde Bar sit 20 kegs. Six tap lines, each 100 feet long, extend up to the bar at this watering hole in Philadelphia. About once a month, the lines are cleaned of the calcium deposits and organismal gunk that grow inside and spoil the taste of beer. For that, the Olde Bar calls Nick Less, owner and founder of Philly Tap Services. 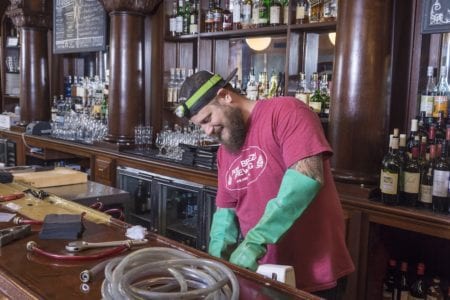 It’s a sweltering Friday afternoon when Less arrives at the Olde Bar. He sports a thick beard and local brewery T-shirt. At his side he carries two 5-gallon buckets filled with various chemical cleaners.

Overtop a snapback trucker hat turned backwards, he wears a headlamp. This is the uniform of a professional beer tap technician, a job the 38-year-old has performed for dozens of bars around Philadelphia for nearly three years.

Generally, tap technicians like Less run one of two types of cleaning: a pot cleaning, which involves running a chemical solution into the lines, letting it soak for about 15 minutes, and then rinsing it out with water; or a circulation cleaning, which also involves putting chemical solution into tap lines, but that solution is run continuously through the lines for 15 minutes, a movement that scrubs the lines while soaking them for a more intensive clean.

How often cleanings are done, and which type of cleaning happens, is dictated by the setup at each bar. The Olde Bar, what Less calls a “pretty straightforward” setup, uses an electronic system that sends an ultrasonic pulse down the tap lines to inhibit bacteria growth. For that reason, cleanings at the Olde Bar and bars like it don’t need to happen every week.

“By law in Pennsylvania, if you have an ultrasonic system, you have to do a cleaning every eight weeks, whereas it’s usually every week,” Less says.

Most cleanings begin with a similar pattern for Less:

First, head to the keg cellar, unhook all of the couplers from the kegs to the tap lines, and couple them together instead. Then return to the bar and use a wrench to remove the tap faucets. Next, jumper all the beer tap faucets together using o-rings and tubing, which makes one continuous loop. Finally, connect the tubing to the pump, which pushes different cleaning solutions through the lines. 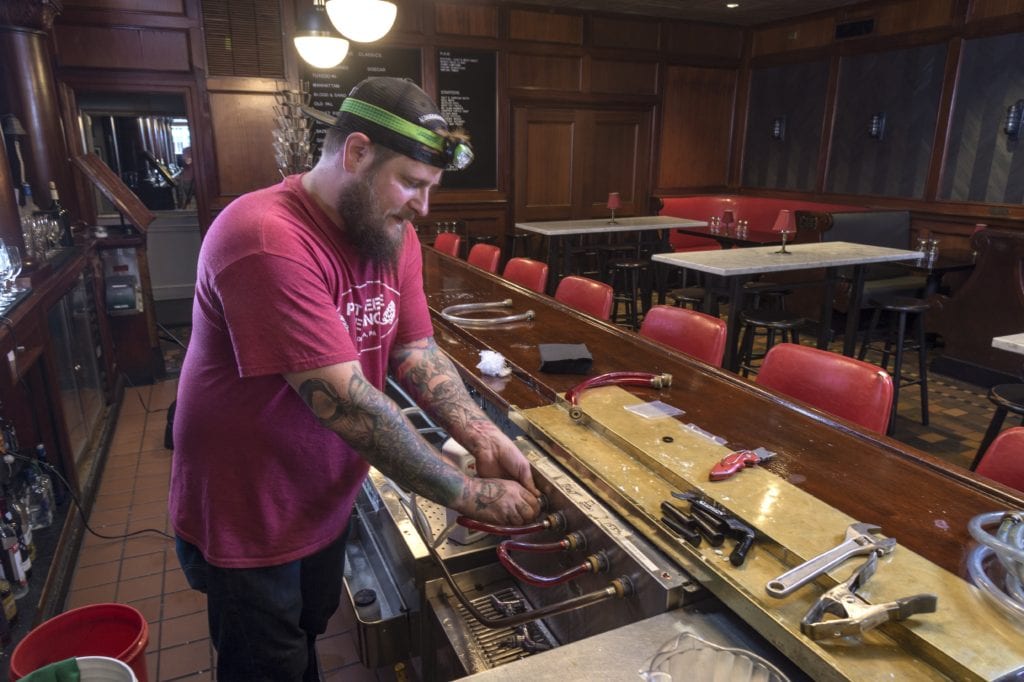 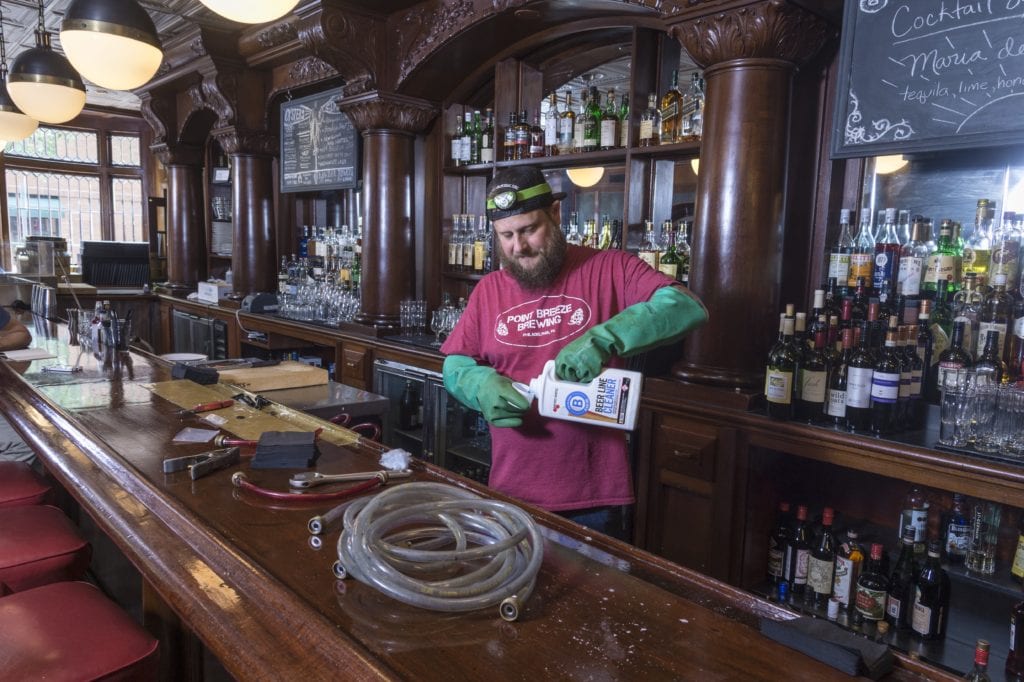 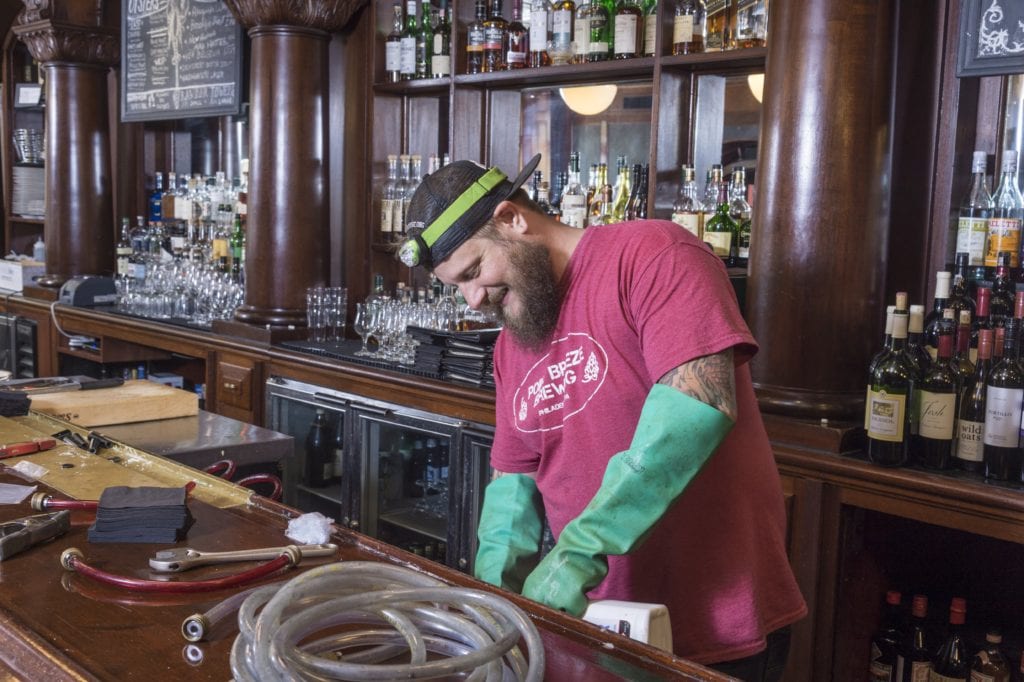 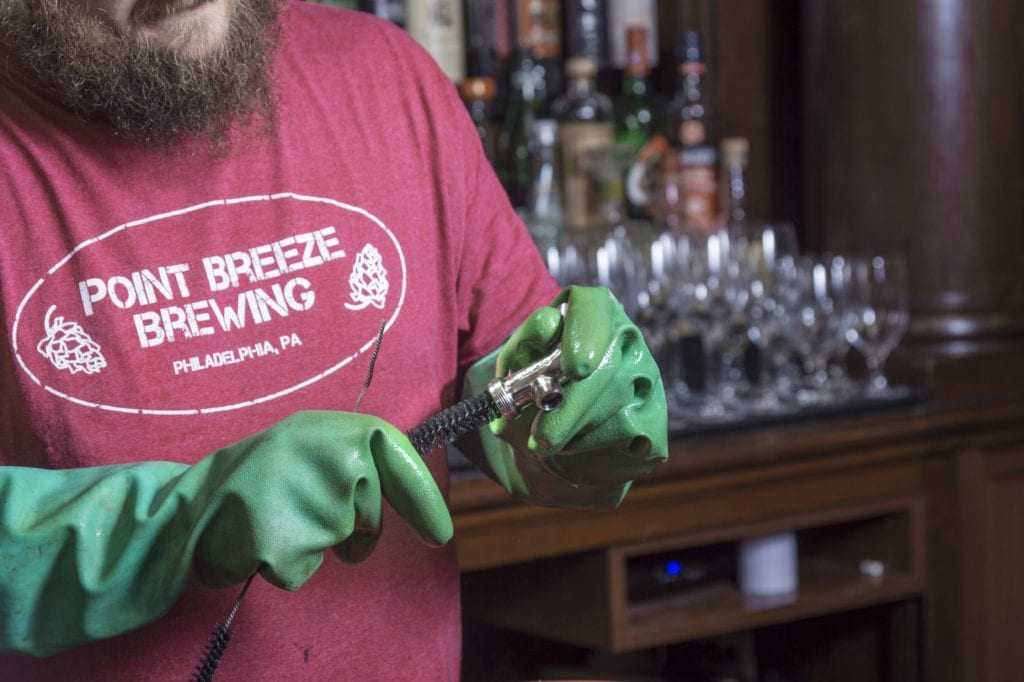 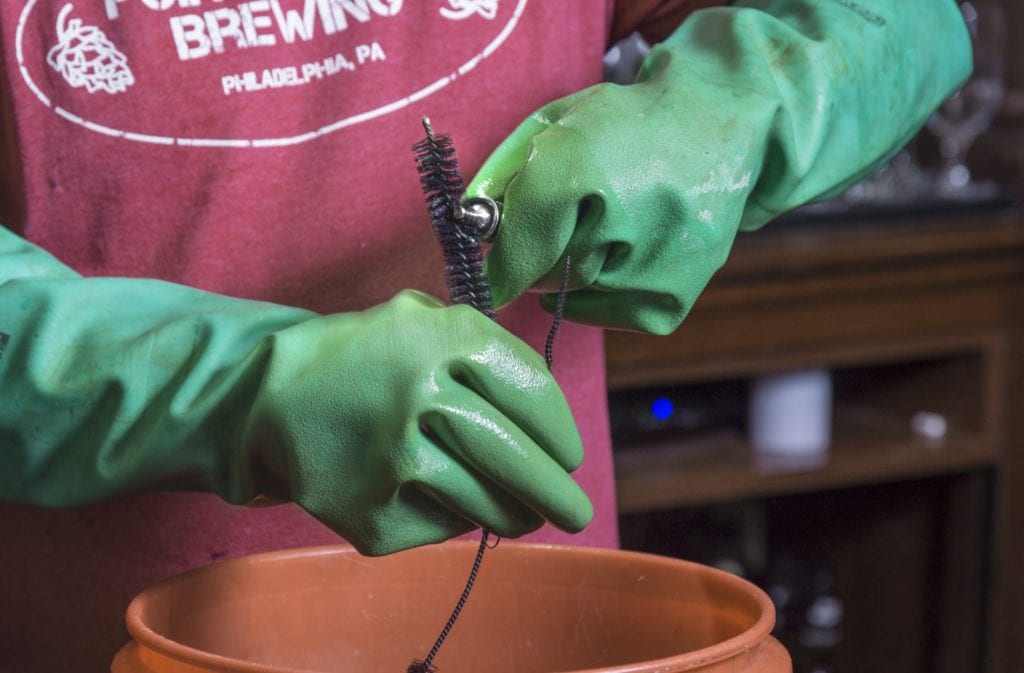 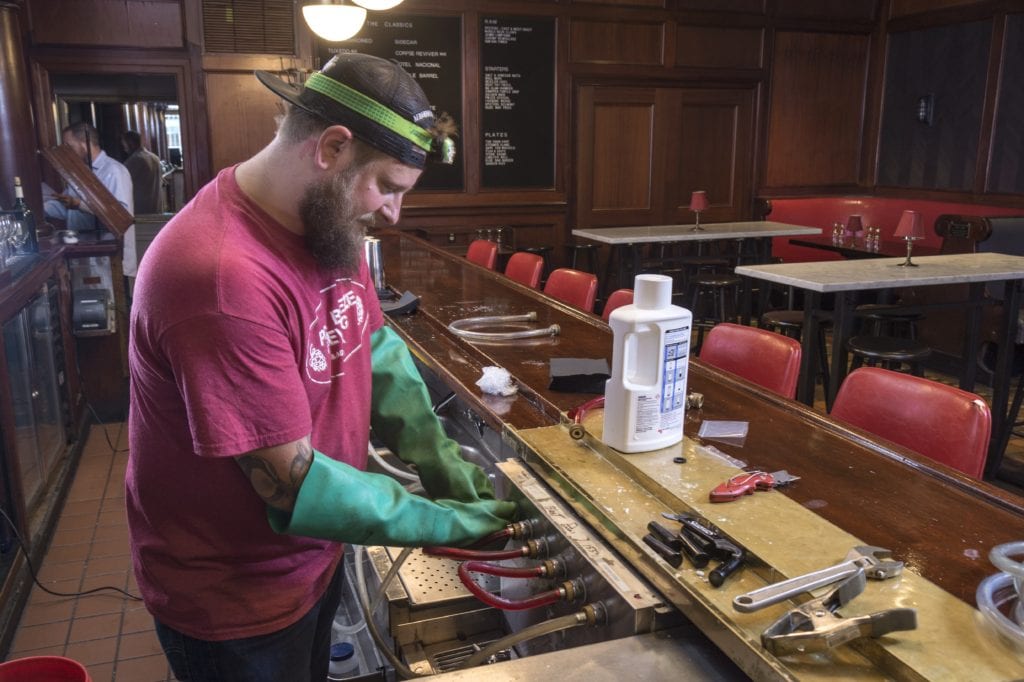 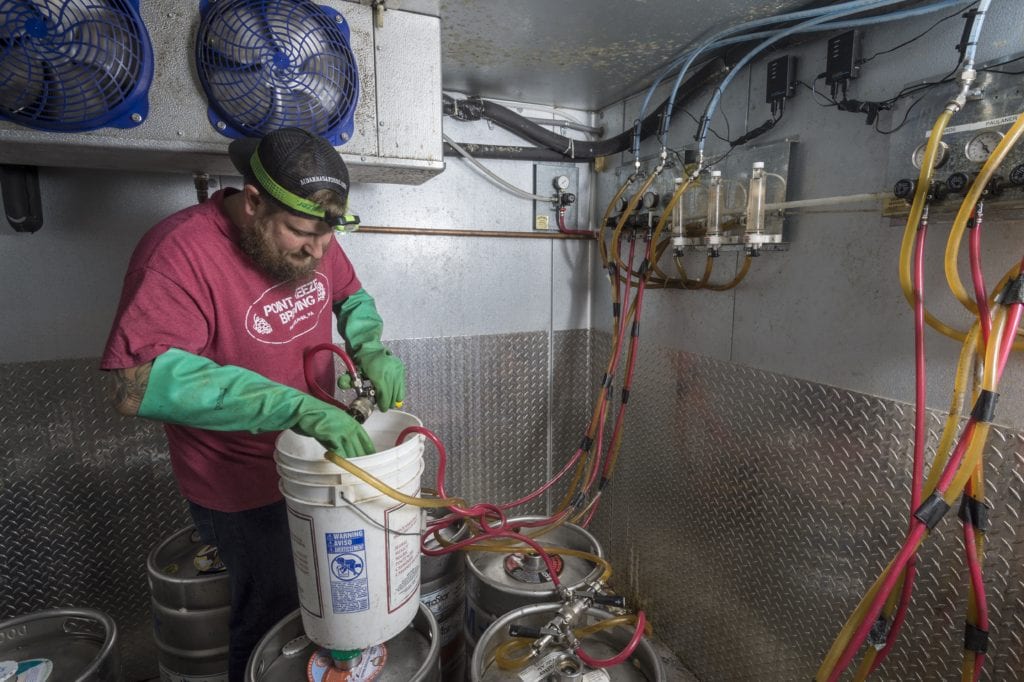 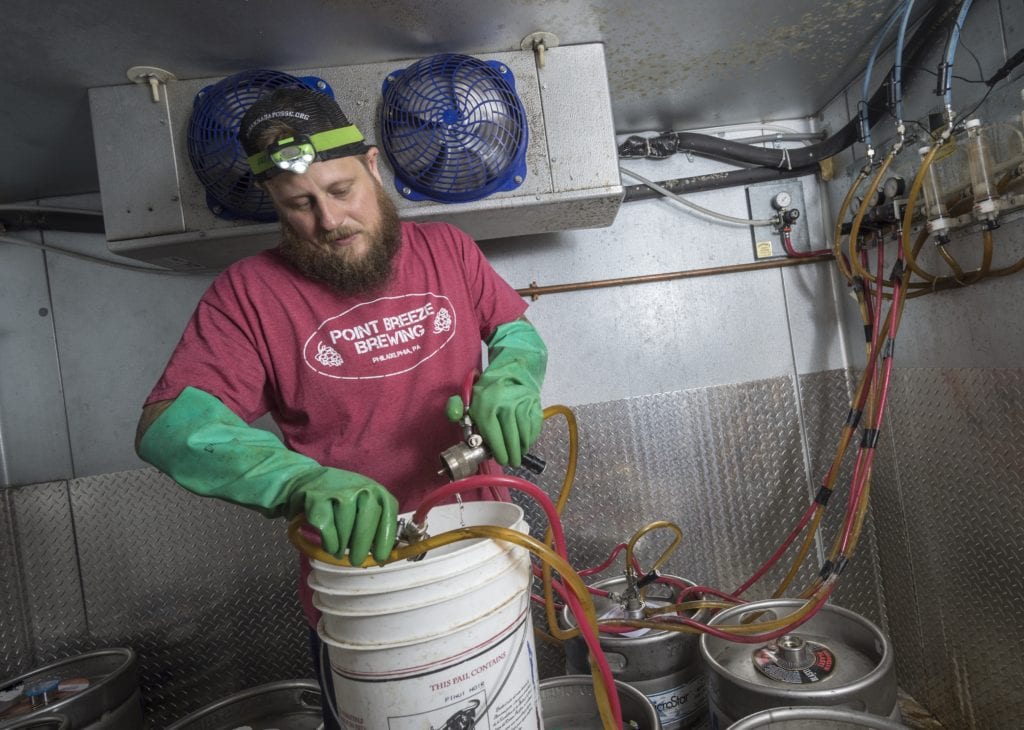 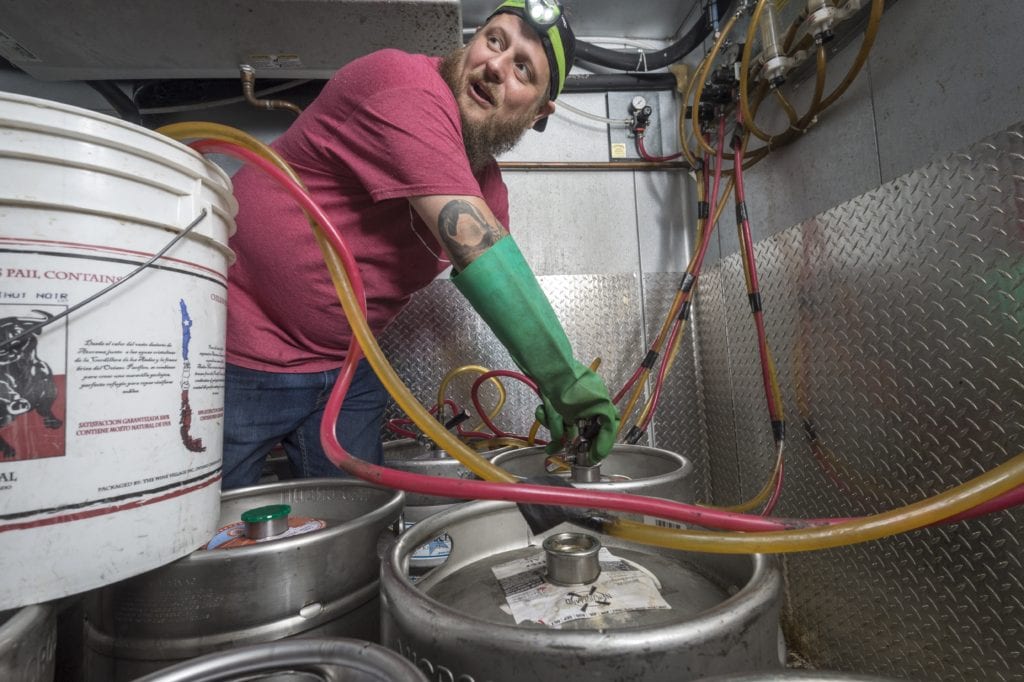 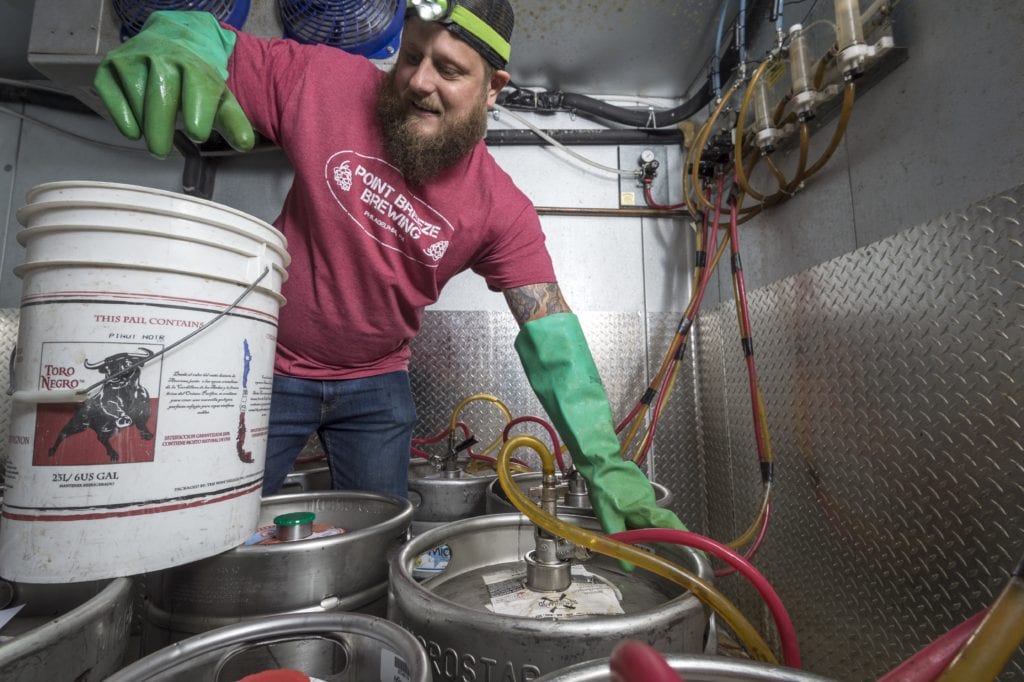 Less is doing a circulation cleaning this particular afternoon and begins pouring an alkali cleaner into one of his buckets. The alkali is a sodium hydroxide solution that kills anything that’s alive and growing in the tap lines, hence Less’ elbow-length green rubber gloves.

“It’s very caustic. You don’t want to get it on your skin,” he says, pointing to a spot on his right forehead. At a previous cleaning, alkali splashed on his forehead, an accident that left a small burn mark. That’s the potency of the blue-colored chemical he starts pumping through his loop of tubing. While that happens, he individually scrubs each of the tap faucets. 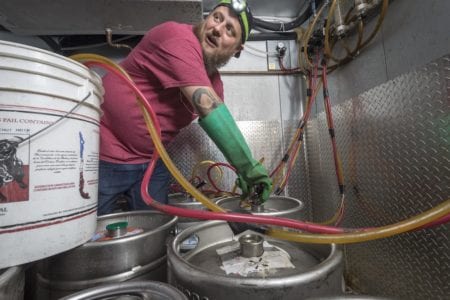 In the past, tap technicians pumped glass beads through the tap lines to clean them. These days, Less says, the technology is advancing rapidly. While he still employs a small pump and some hoses worth about $1,000 total, he has his eye set on a more advanced system, a machine that pumps solution and tiny sponges through tap lines. But that sort of setup runs anywhere between $2,000 and $8,000.

To the average beer drinker, bacteria buildup in a tap line won’t alter the taste of a beer — and it certainly won’t harm the drinker, one of the many benefits of alcohol. But seasoned drinkers will notice when a tap line is dirty.

“If the lines are really bad, you can start to pick up sour notes,” Less says.

Caustic Work for the Perfect Pour 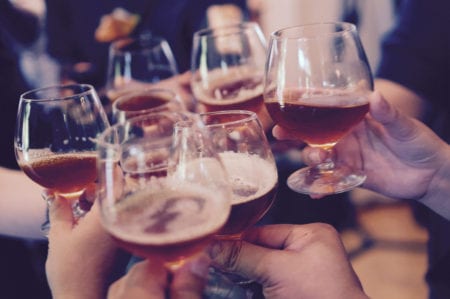 ge, a cleaning takes one to two hours, and Less will do about three cleanings per day. After the alkali solution has circulated through for 15 minutes, Less starts pumping regular water through the lines again. He uses litmus paper to check the pH of the liquid traveling through the line into a nearby bar sink: When the pH sits between 6 and 7, he knows all of the alkali solution is out of the line. He dismantles his loop, reattaches all the tap faucets, and then heads back to the keg cellar to reconnect all the tap lines to their respective kegs. Then it’s off to another bar.

It’s easy to see that Less loves being a tap tech, despite the harsh chemicals and grime that would make the job a fit for a “Dirty Jobs” episode. He laughs and jokes constantly, and the work comes easily to him. Less, who owns a couple of homebrewing supply stores in Philadelphia, always knew his way around tap-pouring technology. When he realized there weren’t many companies servicing tap lines in Philly, he took a three-day crash course in cleaning. He now has enough clients in Philly that he’s planning on hiring a second person.

“This all came pretty naturally to me,” he says. “Once you get going, it’s easy as cake.”