By 2050, one-third of U.S. electricity could be supplied by wind power. Along with land-based turbines, offshore wind “farms” of turbines spinning high above the seas will be a crucial component to a wind-powered future. For the field service industry, it could also mean tens of thousands of new jobs in construction and maintenance. That’s one of the larger points from the “National Offshore Wind Strategy,” a report jointly published in September by the U.S. Departments of Energy and the Interior that concluded the development of 86 gigawatts of offshore wind power would support 160,000 total jobs. 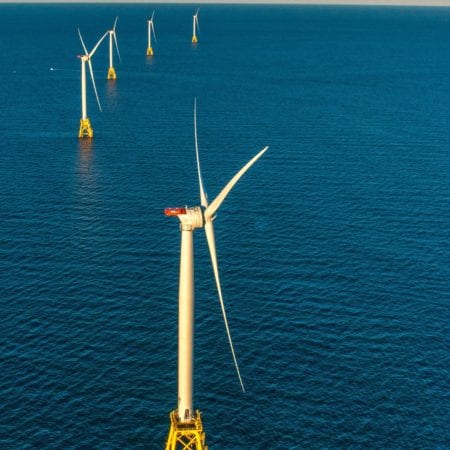 Many of these early wind farms in federal waters will look a lot like the Block Island Wind Farm. The 30-megawatt, five-turbine farm in state waters off Rhode Island’s coast comes online this year and can generate enough electricity to power 17,000 homes in New England. Over time, such farms might grow to the point where one offshore wind project is supplying more than 1,000 megawatts of wind energy.

A Windfall for the Service Industry?

“The Department of Energy doesn’t ultimately know how many leases they’ll be putting out,” says Bruce Hamilton, a director in the energy practice of Navigant Research. “But there’s a huge amount of wind available.”

There’s also a huge amount of jobs at stake. September’s “National Offshore Wind Strategy” report builds off an earlier “Wind Vision” analysis, which served as the basis for assuming 86 gigawatts is a plausible scenario of U.S. offshore wind capacity by 2050. The analysis drills down more specifically on what the possible jobs picture looks like: Roughly 15 percent of all land-based and offshore wind jobs will be on site, while 45 percent are turbine and supply-chain jobs. (The remaining 40 percent are “induced” jobs — the supposed local economic effect of people working in restaurants or hotels nearby.)

In numerical terms, that means 44,000 construction jobs and almost 3,500 jobs in operations and maintenance will be required in 2050 to support however many offshore wind farms are required to hit 86 gigawatts of power. By 2030, there could already be 23,000 construction jobs and another 1,025 in operations and maintenance, according to a Department of Energy spokesperson.

But some of these jobs in construction are just temporary, although jobs in operations and maintenance could last up to 25 years beyond the opening of an offshore wind farm — and even longer, assuming offshore wind farms are kept operational.

“Anytime you calculate a number it’s a function of many assumptions,” Hamilton says.

Wind energy is policy, after all, and policies are subject to changes under the next administration. President-elect Trump is a critic of Obama’s alternative energy policies and this week picked Scott Pruitt, a leading critic of Obama’s climate change policies, to lead the U.S. Environmental Protection Agency.

The biggest assumption of all? That 86 gigawatts of wind power will be generated by offshore wind farms by 2050. Hamilton has his doubts.

“It’s probably not going to happen,” Hamilton says. “[Wind energy] is a policy-driven business, and policies are hard to forecast.”