It isn’t often that companies turn to the classroom to solve a labor shortage, but that’s what Anderson Plumbing, Heating & Air in San Diego, Calif., has done. Facing a shortage of skilled workers, the San Diego-based company’s leaders determined that if they couldn’t find skilled workers, they would train them. Two years ago, the company founded Anderson Career Builders Institute (ACBI), a state-and privately funded trade school for the HVAC and plumbing industry. The 18-month program allows recruits to earn an income and gain workplace experience while attending classes.

The shortfall of technicians isn’t new — only 6 percent of U.S. workers enter the trades, according to Alyssa Slater, HR liaison for ACBI — but as service demands increase and older workers retire, the situation has become critical.

Mary Jean Anderson, who owns Anderson Plumbing, Heating & Air, founded the institute with a class of 12 in January 2017. Since then the school has graduated 28 people, including five women and six military veterans, ranging in age from 25 to 50. 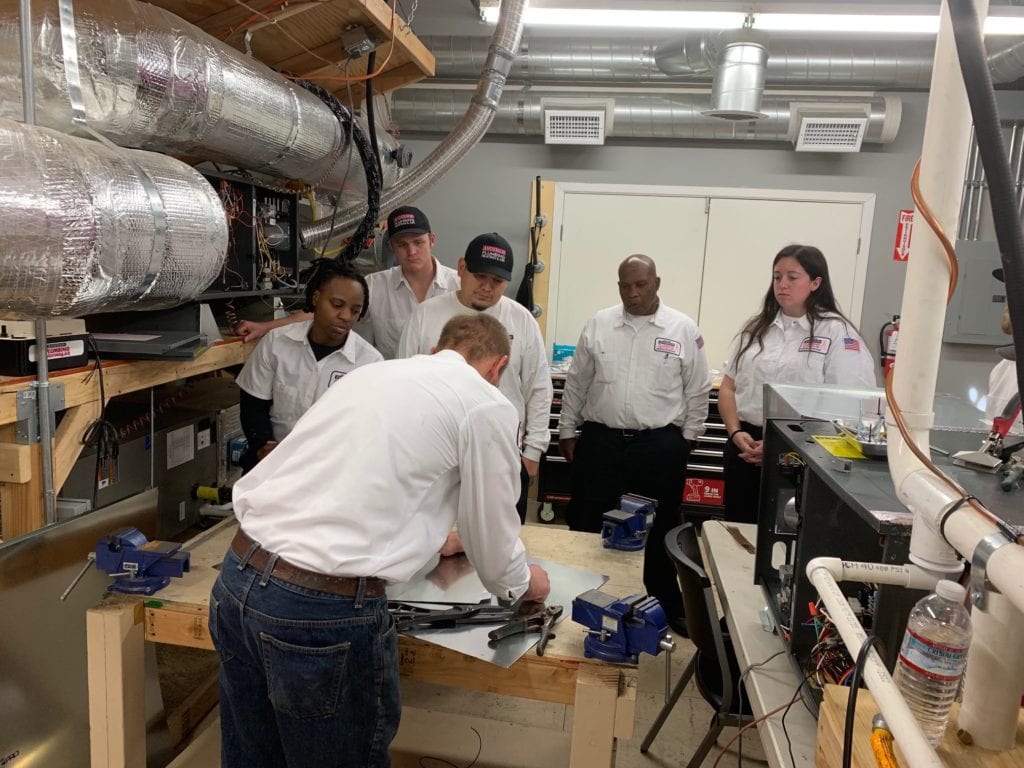 Many students are pursuing a career change, Slater says. “One recruit was a bus driver, another was a maintenance technician. We had one student who worked in water filtration at the San Diego Zoo. We’ve also had students right out of high school but if they are over 30, they are usually in a career change.”

While the 18-month school is privately funded by Anderson, the company secured a state grant in March 2018 that allowed them to start a 90-day pre-apprentice program. No experience is required for the pre-apprenticeship and students are paid minimum wage while learning, which consists of eight hours of technical skills and two hours of interpersonal skills per week followed by field work alongside an experienced technician.

On completion of the pre-apprentice program, students transition to a 12- or 18-month program at ACBI, depending on what they want to study. (HVAC certification takes 12 months, while plumbing and repair certification takes 18 months.) Once they graduate, participants will have achieved a level of expertise that prepares them for an entry-level technician position. The typical path of a recruit is to start at a maintenance-level job, where duties might include replacing water heaters or running gas lines, and work up to higher levels as their experience progresses.

We’ve had to push off growth because we couldn’t find people. We give our recruits paid training and work experience. In return, we ask that they give us a five-year commitment to the industry and, hopefully, to Anderson Plumbing. — Mary Jean Anderson, owner, Anderson Plumbing, Heating & Air

Anderson’s husband, Bryan Rominger, who has more than 30 years of experience in the plumbing industry, designed the curriculum with a focus on residential applications. Since opening the institute, he has expanded the classes to include plumbing maintenance, drains and HVAC maintenance. Students receive two days of classroom and lab instruction per week, and spend three days in the field working alongside technicians.

Slater, ACBI’s HR liaison, was hired last year to manage enrollment, recruitment and grants. “Early on we ran online ads and attended job fairs but now the majority of students are referred by word of mouth.” She says they often have up to 140 applicants for less than 20 slots, and they rarely run ads.

The hire rate is also exceptional, with some 90 percent of graduates placed in industry positions. Anderson recently added 18 graduates to its workforce, which has allowed them to expand smaller departments, such as drain maintenance.

“We’ve had to push off growth because we couldn’t find people. We give our recruits paid training and work experience. In return, we ask that they give us a five-year commitment to the industry and, hopefully, to Anderson Plumbing,” she says.

Though Anderson founded the school to ease her own company’s labor shortfall, other HVAC professionals have visited the institute in hopes of starting a school or possibly collaborating with ACBI. Six HVAC/plumbing companies have asked if they could send recruits through training, and several companies have recruited graduates who aren’t hired by Anderson.

As for what they’ve learned since founding the institute, “not to limit recruiting,” Slater says. “We’ve learned to be picky. When the school opened, we marketed the program through social media, also making a pitch to job seekers at career fairs, women’s centers and veterans’ organizations. Once we stopped restricting where we recruited, our applications soared.”

“We’re working towards solving the labor shortage but we haven’t resolved it yet,” she adds. “A lot of our workers are reaching retirement and it takes time for ‘greens’ to catch up. The school is one path that could lead us towards a solution.”