Dive Into the Watery World of Boat Bottom Cleaners

Not every field service technician can say they spend their time tinkering underwater. But for professional hull divers who clean and maintain boats, submarine field service is all in a day’s work.

The bottom of most sailboats, yachts and powerboats are sealed with anti-fouling paint, which helps to slow the growth of subaquatic organisms like algae and barnacles. But the special paint doesn’t completely prevent organisms from attaching to the hulls of a boat. That’s where the professional “bottom cleaners” come in.

Hull diver Matt Peterson has been in the industry since 1994 when he started, Fast Bottoms, based near San Francisco, Calif. Boat owners only have to renew anti-fouling paint every two to three years, so they don’t often see what’s going on underwater. “It’s important to have a set of eyes on the bottom of your boat on a fairly regular basis,” Peterson says.

Aside from cleaning, divers inspect flaws and check out underwater propellers and other mechanical equipment. “Little things can quickly become a big problem if you don’t take care of it right away,” says Steven Neil, another professional bottom cleaner and owner of San Francisco-based CNI Marine Services. “As a boat owner, hull cleaning may be the most important thing you have to do,” he says.

A dirty hull causes drag that slows down speed and reduces the boat’s performance, increasing fuel consumption by as much as 20 percent, Peterson says. “It’s like driving a car with flat tires. You’ll get where you want to go, but at what cost to performance and time?” he says. 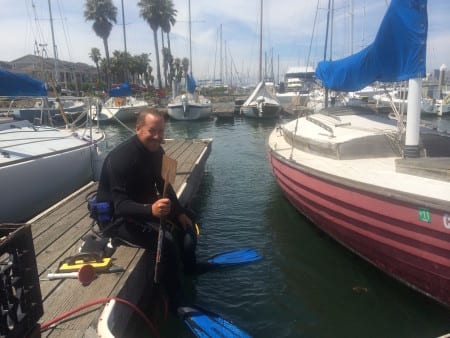 The algae- and barnacle-busting tools of the trade are fairly simple: To clean a hull, Peterson uses what he describes as industrial-sized abrasive pads that vary in coarseness, brushes and scrapers. Basic maintenance involves checking and replacing sacrificial zinc anodes — highly active metals that corrode instead of the underwater metal parts they protect.

Scuba diving certification, or at least a surface-supplied air system, are also essential. Hull cleaning in the chilly San Francisco Bay, where both Peterson and Neil are based, is a year-round job, but water temperatures can dip to 50 degrees Fahrenheit during the winter. A wetsuit or a drysuit is a standard uniform to combat the elements.

So, what’s tough about the job? A great white shark recorded attacking a seal in San Francisco Bay earlier this month hit close to home for Peterson. Less menacing wildlife also cause problems. Neil says he deals with a particular flock of birds that eat purple berries and deposit the remains on a yacht he maintains. The mess makes for a lot of extra clean-up, he says.

Peterson and Neil say that, besides the grit necessary to handle occupational hazards, boat maintenance requires know-how acquired through repetition and years of experience. Despite the sometimes dangerous work environment, the work has plenty of rewards.

“The best part about what I do is being my own boss,” Peterson says. “Being self-employed is the most rewarding thing I’ve done, and being outdoors on a daily basis is just icing on the cake.”